You are here: Cyborg5 Home > CY's Eye on Life > Chillin’ Out in a Test Drive 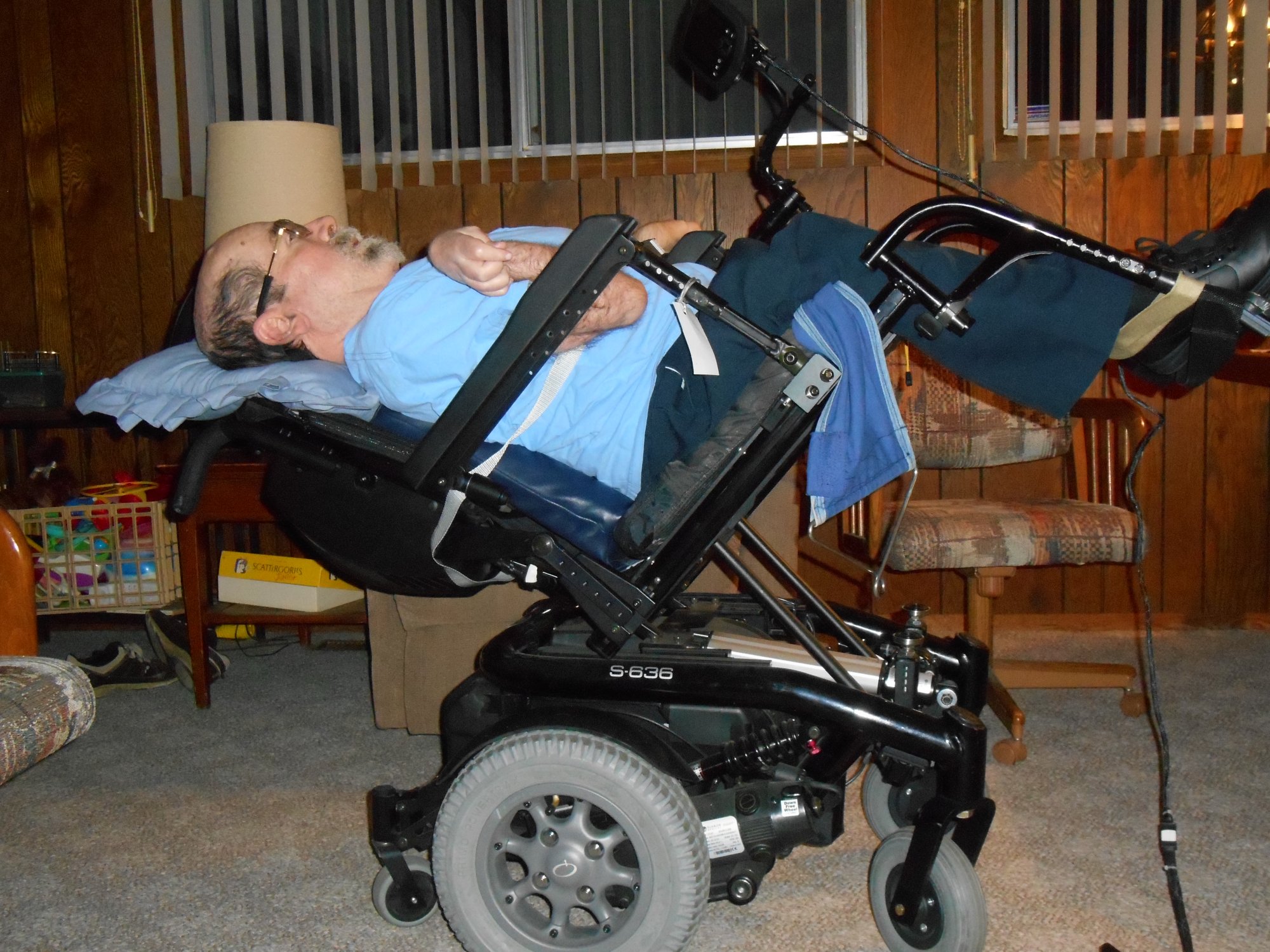 A couple of days ago my wheelchair guy dropped off a demo of the type of wheelchair that I will be getting. This is not my new wheelchair. It’s just a loner for a test drive. I was not able to mount the control stick where I could use it but dad held the stick up to my hand and I was able to see how the stick works. I’m still not sure whether I will use my hand or my mouth to control it. One of the main reasons I wanted to sit in this wheelchair was to see how it reclines. This photo shows the chair in full reclined position. This is the position that might save my life. I get really bad coughing spells sometimes and the only way to get the gunk cleared is to lie down. If I would get a coughing spell where I was out somewhere it would be really bad. So this ability to recline might be an actual lifesaver. Even at home there have been some times where dad barely got me laid down in time. I know that this recline is far enough because while I was testing it I coughed up a tiny piece of White Castle hamburger that I didn’t realize was stuck in my throat. I’m still waiting on 2 other types of controls that I need to try out.

In the link below is an article about a minor breakthrough in research about my kind of disease known as Spinal Muscular Atrophy Type II.

I want to give a little context about this article… I have SMA Type II and this study was with SMA Type I. The type I patients exhibit extremely weak muscles at birth and rarely reach their first birthday. It is basically an extremely severe version of what I have. Both types of SMA are caused by a problem with something called the SMN1 gene. The treatment described in this article is called gene therapy. Basically they give you a virus that is designed to insert a repaired version of the gene into your system. It basically infects you with a cure. They tested nine patients. Three of them got a low dose. Six of them got a midsized does. This was mostly just to test that the treatment was safe and did no harm. It wasn’t really to determine how effective the treatment was. However the results showed that the three patients that got the low dose did show some muscle improvement on a standardized test of infant muscle capability and that the six who got the midsized dose showed even more improvement. And none of them died nor did any of them have to go on a ventilator. Basically it’s an extremely preliminary indication that it worked. So the good news is that he may have found some extremely preliminary indications that this treatment can cure my disease. That’s the good news. The bad news is this is working on people who are basically newborns. In someone like me who have had the disease for 60 years, it’s done a crap load of damage to my body so the best I can hope for is that if the treatment ever became available down the road for Type II patients like me, the best I would hope for would be I wouldn’t get any worse. I’ve known for a long time that if they did come up with a treatment, that would be the case. Still it’s good news.