This is the fourth in a series of articles about my recent quest to replace a broken VCR in this era of DVDs, DVRs, and other newfangled gadgets. Click here for the beginning of the series.

As I mentioned earlier, my Toshiba VCR is probably my favorite. I really wanted to replace it with another Toshiba model. I went to BestBuy.com and HHGregg.com and eventually picked out a Toshiba model SD-V295 DVD/VCR combo that looked a lot like my existing Toshiba VCR with a DVD stuck on the side (image on right). They generally don’t have VCRs on display in the store where you can play with them or checkout features, so I just sent my dad over to H.H.Gregg to pick it up and bring it home. We took it out of the box and I looked at the back of unit. Here’s what I saw… or rather what I didn’t see! 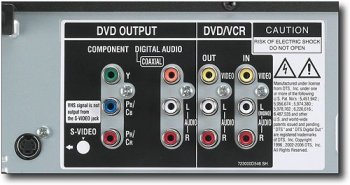 I did not see any coaxial RF connectors! It meant that this VCR had no tuner. It would only work if you connected it to a cable box or satellite box. I couldn’t believe it! I usually look at the online photos, especially the detailed photos of the back like the one I’ve shown here. I think that I may have actually looked at this image at BestBuy.com to verify that the component video outputs were for the DVD portion only which was as I expected. I just didn’t realize that there was no cable connector for connecting analog cable or antenna.

I did a lot of head scratching trying to figure out if I could make it work with my set up. Eventually I concluded that I would lose too much functionality by giving up the ability to record from analog cable. I searched around a little bit more and found a really nice Sony SLV-D 370P DVD/VCR combo. I very carefully looked at the images of the back side and verified it really did have an RF coax input and output. We packed up the Toshiba, returned it, and purchased the Sony. It’s a really nice looking model with good features and all of the right connectors.

All of this occurred in mid-April 2007. There’s more to this story but I want to jump in briefly to early July 2007. The JVC VCR in my office started acting flaky. It takes about four attempts to get a tape to insert properly. It keeps trying to eject it and the VCR or even turn on at all without a tape in it. When you turn it on, it tries to load the tape on the heads and when there is no tape in the machine something jams and the machine shuts itself off. Since I’ve been having pretty good luck with my new Sony I decided to get another one for the office. Much to my surprise it wasn’t available anymore. The Sony model 370 had been replaced by model 380 which was virtually identical except it had no RF inputs or outputs and no tuner.

To further my shock and dismay none of the VCRs that were available had a tuner! I thought that the tunerless Toshiba was just some cheap model that they were putting out there because more and more people are using satellite which does not have analog cable capabilities like regular digital cable does. Satellite users have to have a separate box for every TV and every VCR (although some satellite boxes are dual tuner). I was now discovering that VCRs with tuners had been completely withdrawn from the market!

I did finally find a Sony 370 at Amazon.com for sale through a third-party reseller. Amazon itself did not have it.

In our next installment we will take a nostalgic look back at early TV tuners before we discuss the invention of the cable ready TV and VCR. Only then can we fully appreciate the mystery of the missing tuners!