This is the 11th in a series of articles about my recent quest to replace a broken VCR in this era of DVDs, DVRs, and other newfangled gadgets. Click here for the beginning of the series.

After all that complaining about tunerless VCRs, not only was I able to replace my broken Toshiba VCR in my bedroom with a really nice Sony SLV-D370P DVD/VCR combo, when my JVC VCR in the office failed as well, I was able to get another of those same Sony’s to replace it. I had to get it through a third-party reseller through Amazon.com which is a little bit scary. Since the guy had good feedback I went ahead and ordered it. It came in a couple of days and has worked fine.

However there was still a problem using the Sony in the bedroom. 95% of my viewing in the bedroom is while I’m in bed. Handling a remote control in bed is a bit difficult for me. I couldn’t get my very old programmable remote to work the new Sony VCR. Since I have two VCRs in the bedroom and I only need to watch one of them in bed, I decided to swap the new Sony with my older JVC VCR and make the JVC my primary recorder that I use while in bed. Unfortunately this old programmable remote wouldn’t work the JVC either. I was going to have to buy a new remote control.

That doesn’t seem like a very big deal. $20 at Best Buy gets you just about any kind of remote you want. However I have to specially adapt the remote so I can use it. I can’t really hold the remote in my hand in a way that it’s pointing at the cable box, VCR, and/or TV. Instead I set it on a shelf and I have some extra push buttons on the end of a long cable that I hold in my hand while in bed.

The image on the right shows the two remote controls and the mess of cables leading to a cluster of 11 little switches that I hold in my hand to control the TV, cable box, and VCR. The story of those little micro switches and various remotes and devices I’ve wired with them is a pretty interesting story. So let’s set the time machine for about 25 or so years ago and review my history with rewiring devices with remote buttons.

Many years ago the first remote control TV I had in my bedroom only had two buttons on it. The first button was a channel up button. The other button cycled through four different settings. The first click turned it on and set the volume and a fixed high level. Subsequent clicks reduced the volume to medium and low volume settings. A fourth click turned the television off. It was sort of like the settings when you pull the chain on a ceiling fan. There was no channel down or volume up buttons but this was pre-cable so the were only 5 TV channels to cycle through. It used radio control rather than infrared so it didn’t have to be pointed at the TV set. I still had enough strength in my hand in those days to hold the entire remote and push the button with my thumb.

Later I got a new TV with a traditional infrared remote with the usual volume up and down, channel up and down etc. buttons. Because it needed to be pointed at the set, I couldn’t find a way to hold it in my hand properly. That was only a minor problem for me. I would simply have my dad rewire the remote with a few small micro switches.

Of all the pieces of adaptive equipment I’ve ever used, the one piece of equipment that ounce-for-ounce and dollar-for-dollar has been the most useful gadget I’ve ever had is the “Radio Shack Model Number 275-016 SPDT Micro Switch without Roller” currently selling for $2.69 at Radio Shack’s everywhere. This handy little switch measures just 3/4″ x 1/4″ x 3/8″. The very first one that I used was probably the most important adaptation of a device I’ve ever made.

In the winter of 1978 I was working full-time at Indiana University Department of Medical Genetics as a computer programmer. There was a blizzard that winter and we were off work for several days as the city shut down. I had nothing to do for several days except read computer magazine about these new wonderful devices called “personal computers”. As soon as the weather cleared I went right out and bought my first kit to build my own personal computer. 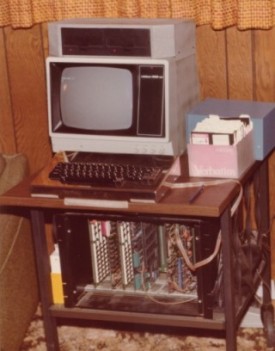 It was a Cromemco Z-2 S100 bus computer with a 4 MHz 8-bit Zylog Z-80 processor and 16k bytes of RAM memory. It was my pride and joy. Initially I used an old 12 inch black-and-white TV as a monitor and audio cassette tape for storage. This photo shows it later upgraded with two 5.25 inch floppy drives and 48k of memory. Click on the images for larger versions.

At that time I had pretty good use of my hands. Although I couldn’t dress myself or go to the bathroom without help, I could feed myself and most importantly for my career I could type on a regular computer keyboard. I was able to do some of the construction on the kit computer. I soldered many of the circuit boards myself using a small lightweight rechargeable soldering iron. Dad did all of the mechanical assembly. The image below shows a close-up of the S-100 circuit boards some of which I built myself. 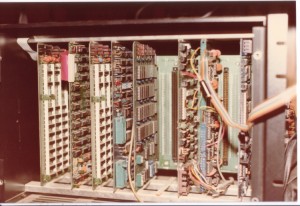 It wasn’t long after I completed my computer that my disability got worse. Congestive heart failure and deterioration of my muscles from Spinal Muscular Atrophy took its toll on me. I had to quit work and go on disability. The worst part however was as I slowly began to lose the use of my hands. That meant I couldn’t use my computer anymore.

The breakthrough came when I realized I could prop the keyboard up on an easel so that the keys were facing me. I discovered I could prop up my right arm, and poke at the keys using a very long pencil. The image below from 1984 shows me (with much more here than I have now) typing on a similarly adapted Radio Shack Model 100 Computer. 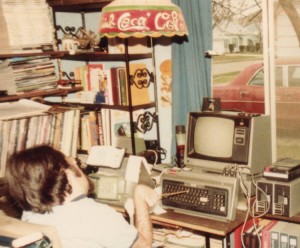 The real problem was what to do about the “control” and “shift” keys. You can’t hold down those keys and type another key when you’re just poking at the keyboard with a stick. Note that in those days computer keyboards did not have “Alt” keys on them. Some of keyboards I used had a “Shift Lock” key which not only converted to upper case but also turned a number keys into punctuation marks like a real typewriter. Computer keyboards today have only a “Caps Lock” which only affects letter keys so for modern keyboards so not only do I have to worry about “control” but also “shift” and “alt”.

The solution was to wire in a couple of these handy dandy Radio Shack micro switches on the end of a long wire and connect them to the “control” and “shift” keys inside the keyboard. I would hold these remote keys in my left hand in typ

e with the stick in my right hand. It worked beautifully!

Soon I had Dad wiring these little switches into all sorts of devices. The next one was a $75 electronics stopwatch that I had bought at the Indianapolis Motor Speedway so that I could time the race cars. It took four of the switches to make that work. The stopwatch had various split time and reset buttons in addition to start and stop. That was much more challenging to solder wires into a tiny circuit board in a watch than it was to solder it into a full-size computer keyboard. Dad managed to do it somehow.

If I had ruined my computer keyboards or the stopwatch they would’ve been easy enough to replace however my next project was very scary. I had spent $650 on a new video camera. I need to solder in three micro switches to toggle record off and on and to zoom in and out. We managed to take apart the handle of the camera where the switches were in find a place to solder in some wires for my handy micro switches. Fortunately it worked and we didn’t blow up a $650 camera. Various other computer keyboards and gadgets got similar treatment over the years. I can’t begin to remember all things we wired up that way.

Eventually they developed some software for MS-DOS that use a special keyboard driver that would turn your “shift”, “control”, and “alt” keys into toggle keys. When Windows was introduced it had this accessibility feature built into it as an option. So I haven’t had to wire a computer keyboard remote in a long time. Most of the rewiring we do these days has been for television remote controls.

In the next installment I will explain more about how we go about rewiring remote controls with the switches and the difficulties we encountered this time around.