After that last Beatles song, I was really surprised when the band again came downstage and waved and bowed. He still hadn’t sung “Yesterday”. The summer before last, Judy and I went to Deer Creek to see Elton John and we were surprised at how many people left during the encore. He still had not done “Your Song”. I realize it was a cold and rainy night and that traffic would be hell leaving the place but why would you spend all of that money and sit through the entire concert and not wait to hear him sing “Your Song”. Judy and I are also the kind of people who never leave a sporting event until it’s completely over no matter how big the score is one way or the other. If you’re going to pay the money to see the event by God you ought to stay for the whole thing!

Judy noticed that the couple who had been standing in the row 1 seats behind us were about to leave after the first encore. She said to the woman “You do know he’s coming back to sing ‘Yesterday’ don’t you?” The woman replied “Oh yeah that would be worth staying for.” And they stayed. As I looked around the arena I didn’t see very many people leaving. This second break was much longer than the first one. We were not going to let him end the show without “Yesterday”.

When he eventually returned, he picked up an acoustic guitar, walked to the center of the stage, and our wishes were fulfilled.

What We Came for 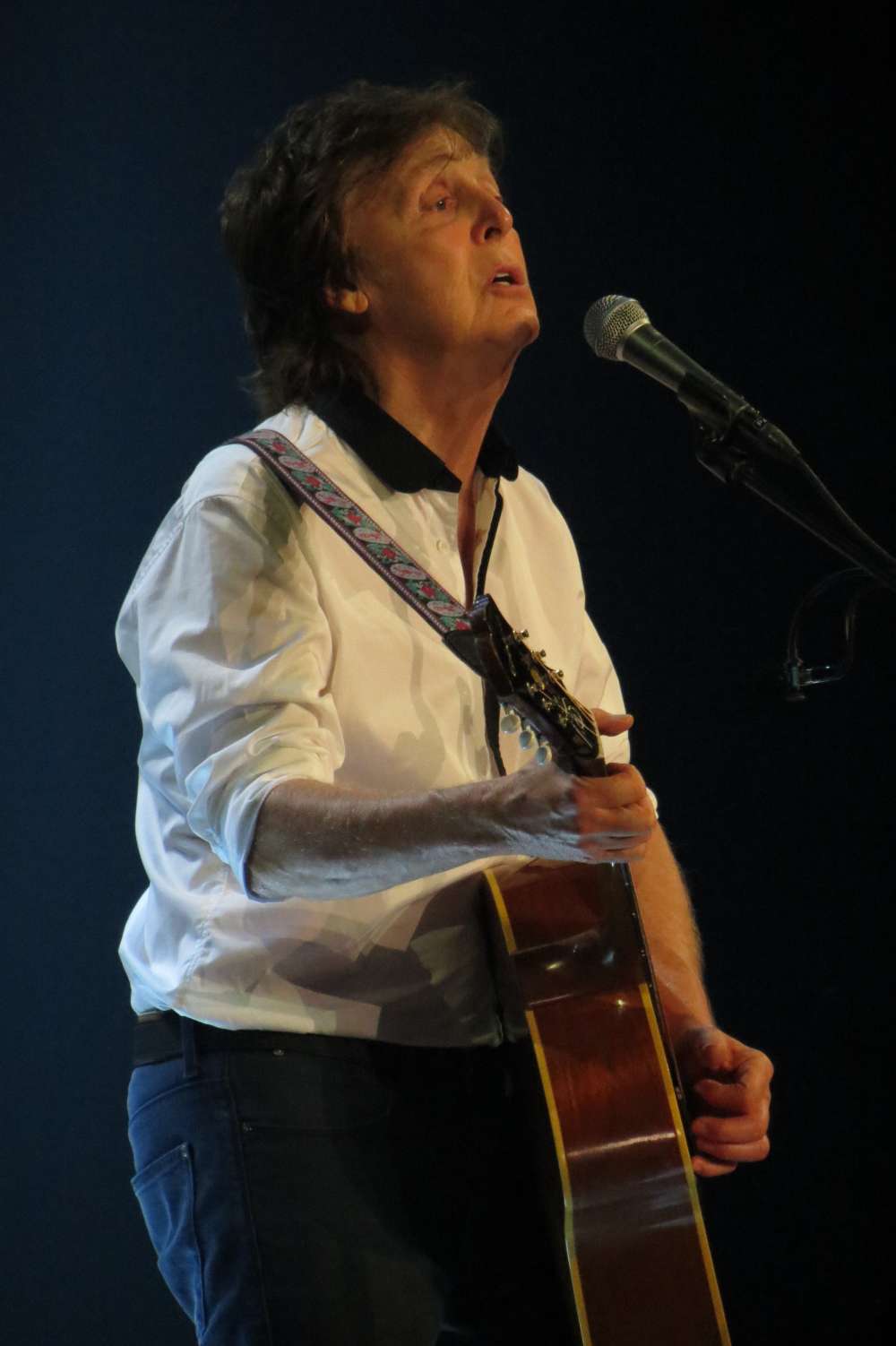 “Yesterday, All my troubles seemed so far away…” Photo by Anne Chapman

I could just leave the review at that but after having detailed the emotions and feelings and history behind so many other songs, I really need to talk a tiny bit this one. I was 10 years old when the song first came out. I liked the song just like everyone did. It was once voted the best song of the 20th century and you will get no disagreement from me there. But it really didn’t mean that much to me until three years later when I got my heart broken by my first love Rosie Shewman. I must have sung that song to myself and cried myself to sleep for hundreds of nights. Of all of the “soundtrack-of-my-life” songs in the world this is the “soundtrack-of-my-life-iest” of them all.

Although she broke my heart, we did end up becoming very good friends throughout high school. In my high school yearbook she wrote “You mean more to me as a friend than you will ever know “. I realized at that moment that the reverse was also true. She meant more to me as a friend than I had ever realized. That taught me a lesson which has served me well throughout many relationships. No matter how much you are attracted to a woman romantically, if the romance isn’t meant to be, don’t discount the powerful blessings that come from a deeply felt lifelong friendship. The chief beneficiary of that lesson was sitting next to me as I cried through the song that night at Bankers Life Fieldhouse. 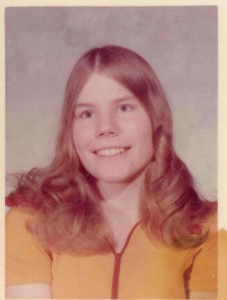 I still miss Rosie every day. I carry these two photos of her in my wallet. The last I saw her was at the Roberts School reunion in 1986 which was chronicled in my award-winning magazine article “The Reunion“. She got married and had a baby. She passed away October 29, 1993 of complications of disability.

I won’t ever see Rosie again. I won’t ever hear John Lennon or George Harrison sing live in concert. And soon this wonderful experience of hearing Paul McCartney sing these wonderful songs would be over and would be just a memory like Rosie and Lennon and Harrison and all of the other events of my life that I had relived over the past couple of hours. 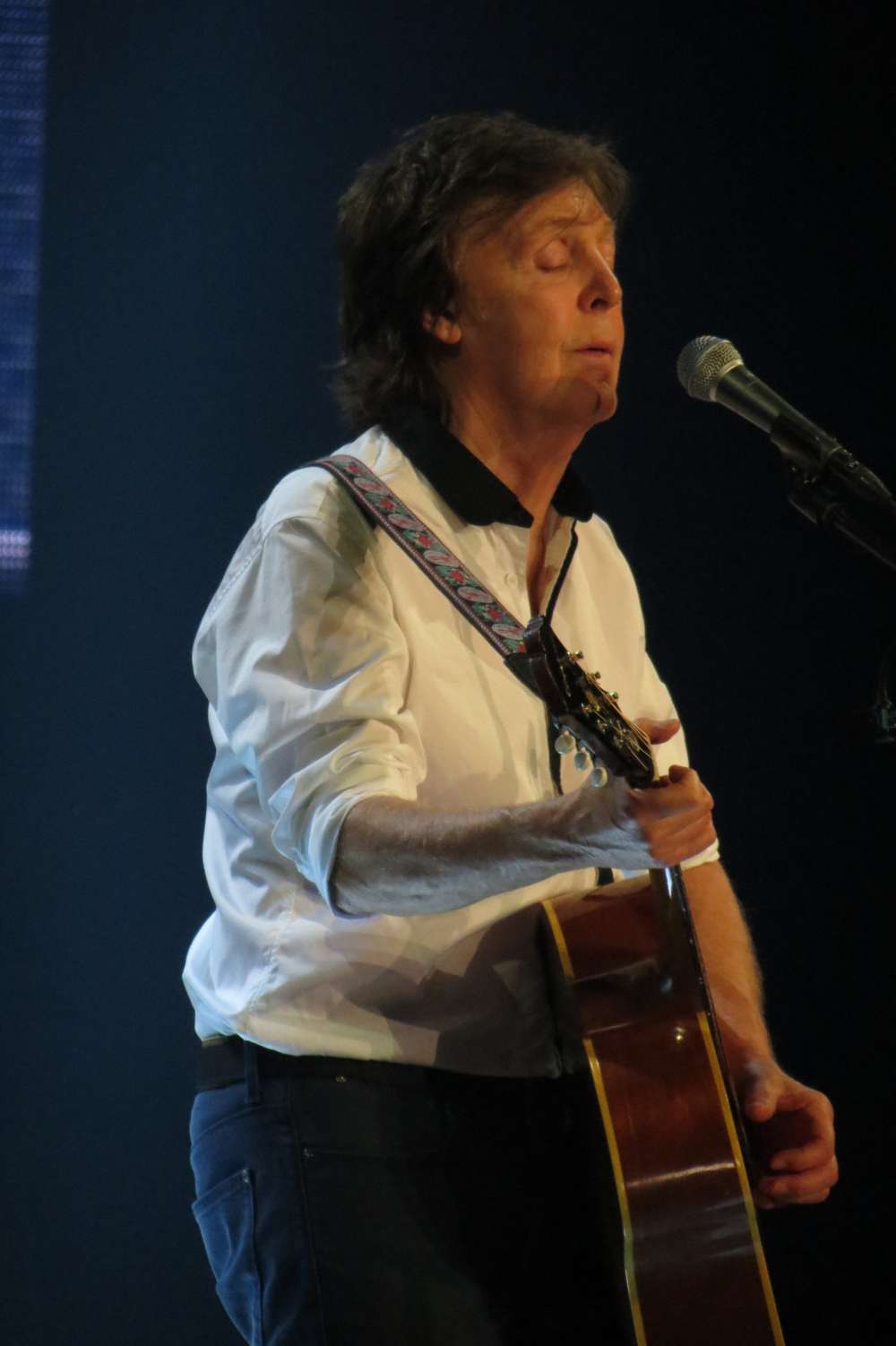 “… I believe in yesterday”. Photo by Anne Chapman

“Helter Skelter” 1968 Beatles album “The Beatles (White Album)“. Once McCartney had finished Yesterday I expected him to take another bow and walk off the stage for the last time. I was really surprised when he declared “Do you want here’s a more rock ‘n roll?”. Naturally most everyone screamed “YES!”. I was too spent to say anything. What came next was an assault on the senses both audibly and visually that was completely unpleasant in my opinion. McCartney had said in an interview that they wrote the song to be the loudest, raunchiest rock ‘n roll song ever written.

I had actually never heard the song before. I had never owned the White Album and it was at a period in their history where I really wasn’t that big of a Beatles fan anymore. Some of their music from “Magical Mystery Tour“, “The White Album” and “Yellow Submarine” was just too bizarre for me. I didn’t really get interested in the Beatles again until “Abbey Road” which followed.  Given the connection of this song to the Charles Manson gang and the book and film about him of the same name, I never felt inspired to go back and listen to the song after I heard about it and the Manson connection. All I can think of that night was I was glad I wasn’t on drugs and I was a little bit pissed off that he would follow such a wonderful song was such a horrible one.

Before the final songs started, McCartney gave a big shout out thank you not only to his band but to all of the other stage technicians, audio, video people and even the truck drivers who made the show possible. I thought it was great that he gave the roadies a shout out.

And in the End…

“Golden Slumbers“, “Carry That Weight“, “The End” 1969 Beatles album “Abbey Road“. McCartney returned to the grand piano and begin gently playing Golden Slumbers. I had run out of tears by that point and the mood had been broken by the previous song however I did get a little bit emotional over this medley of songs which have long been favorites of mine. They are three out of four final songs of Abbey Road which is one of my favorite Beatles albums. Thinking about Golden Slumbers I felt a sense of peace that John and George and Rosie and all of my other friends who succumbed to their handicaps were now sleeping Golden Slumbers. The rock ‘n roll bridge in Carry That Weight is so much a part of the medley and I enjoyed so much that I didn’t mind it as an interruption.” The entire lyric of the final song it was a fitting conclusion to this entire adventure. “And in the end, the love you take is equal to the love you make.”