You are here: Cyborg5 Home > CY's Eye on Life > Paul McCartney in Concert: Part V “Songs From Silly to Serious”

I’ve said it many times so far and I will say it again, my good friend Anne Chapman took some wonderful photos that I’m pleased to share with you. I teased her after the concert saying “Now you did write down which song he was singing during each photo didn’t you?” Of course there was no way to enjoy the show and keep such notes. There are a couple of piano songs coming up that were played on an upright piano. The image of that piano is not from this section of the concert. It was brought back out for another song during the second encore and that’s where the image is from. Also he began one song on ukulele. Unfortunately she did not get a photo of the ukulele. In this section I can’t guarantee that these photos matchup with the songs. So just enjoy the photos and the descriptions even if they don’t line up perfectly. 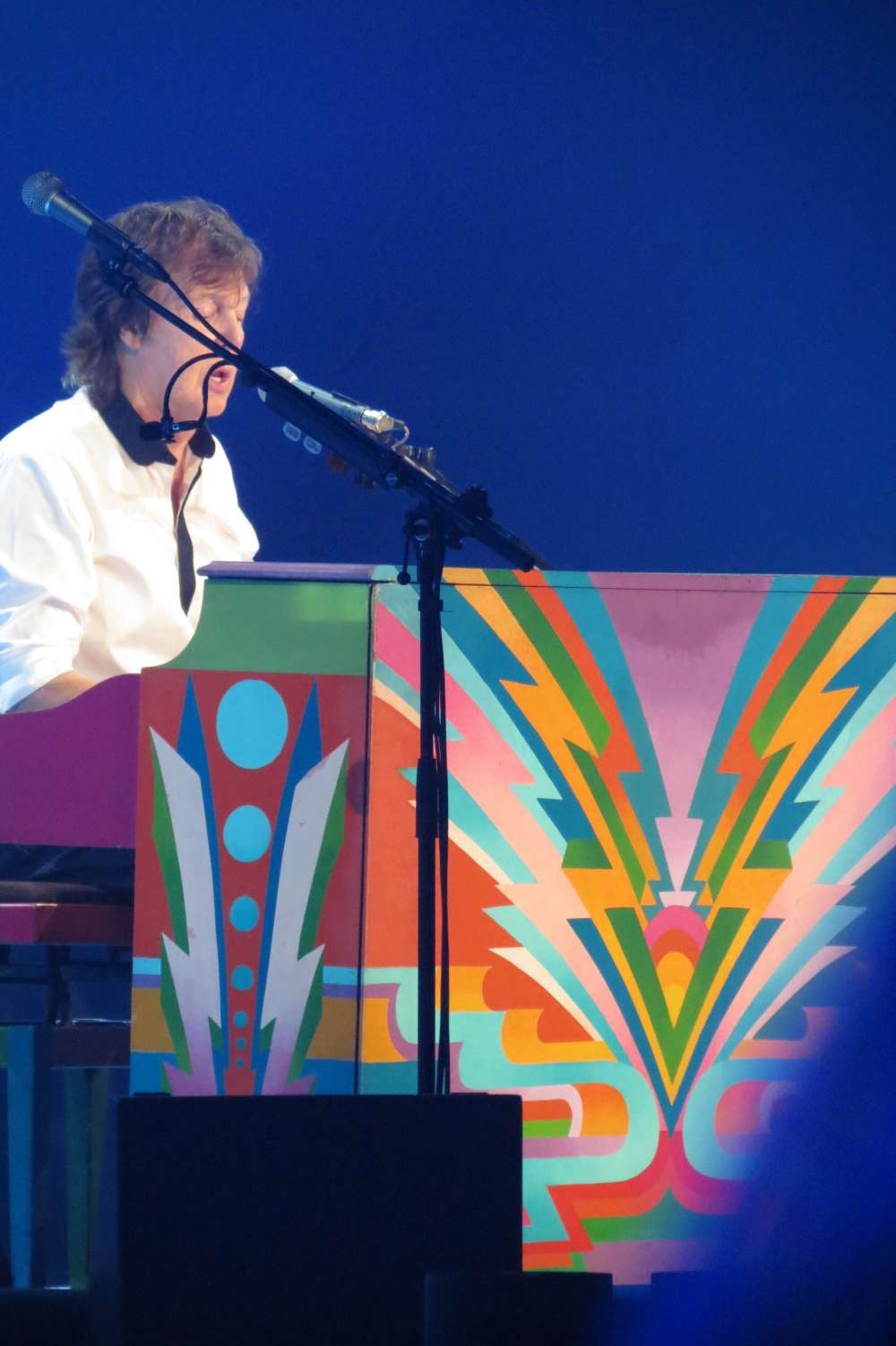 This piano was used on “Your Mother Should Know”, “Lady Madonna”, and “Golden Slumbers”. Photo by Anne Chapman.

“Your Mother Should Know” 1967 Beatles album “Magical Mystery Tour“. They rolled out an upright piano with a 60s psychedelic paint job on it and the band returned to the stage. I never saw the 1967 TV special “Magical Mystery Tour” and never really cared for many of the songs in this period. It was all just a little bit to psychedelic and weird for me. I don’t think I have ever heard this song before. During the song, Judy turned to me and said “That piano sounds like ‘ Lady Madonna’style piano”. She was right because the next song was…

“Lady Madonna“1968 Beatles single. Judy was ecstatic that she had called it correctly. She said she still had the 45 record at home and when it was new she played it constantly. It’s one of her favorites. I always thought it was a pretty good Beatles song. During the song the screen behind the stage projected images of famous women from Mother Teresa to Marilyn Monroe to Judy Garland holding an infant Liza Minnelli and countless others.

This was one of those songs I was surprised to learn was only a single and was not put on an album until years later when it first appeared on the 1970 compilation album “Hey Jude“. 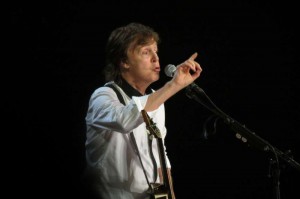 “All Together Now” 1969 Beatles album “Yellow Submarine“. Back on guitar again this silly little song was actually written for a TV special in the UK. Click on the links for details. It was supposed to be a frivolous little sing-along children song and that’s exactly what it is. Although there was some audience participation moments in the concert ironically this sing-along song was not one of them.

Songs with Names in Them 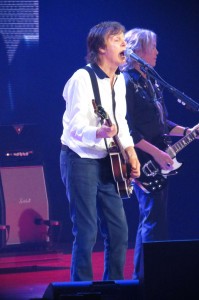 “Lovely Rita” 1967 Beatles album “Sgt. Pepper’s Lonely Hearts Club Band“. This was another of the songs that McCartney said they had not done on tour before. Judy and Anne had never heard it before however they were not big fans of the Sgt. Peppers album. Neither had they seen the cheesy 1978 film “Sgt. Pepper’s Lonely Hearts Club Band” starring Peter Frampton and the Bee Gees among others. Both the album and the bad film are guilty pleasures of mine. There are lots of goofy little character songs on the album and I had thought this one was in the movie as well but my research says it wasn’t. It’s about a meter maid with whom the author of the song is madly in love. I always thought that this song, “Mr. Kite” (coming later) and the other silly songs were a lot of fun. My favorite from the album and the movie but was not played in the concert was “Maxwell’s Silver Hammer“. I especially love Steve Martin’s version of it in the film. 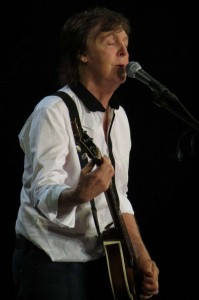 “Mrs. Vanderbilt” 1973 Wings album “Band on the Run“. This was an audience participation song. We practiced and then chimed in on the “oh, hey ho” refrain. I had never heard the song before. It looks as though we’re putting together a theme section of the concert with songs that are the names of people. So naturally the next song had to be…

“Eleanor Rigby” 1966 Beatles album “Revolver“. This was one of the songs that Anne was especially looking forward to hearing. So Judy and I immediately turned to one another and said “Well, Anne is happy now”. I guess because at times I’m one of those lonely people I always really liked this song. Those of you who know the Enneagram Personality Typology know that I am a type 5 and I always thought that Eleanor and Fr. McKenzie mentioned in the song might be type 5 as well. The idea that the padre was “writing the words to a sermon that no one would hear” reminded me very much of Maria Beesing’s parable about the type 5 person in the ivory tower writing everything down but never sharing it. 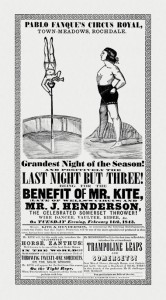 “Being for the Benefit of Mr. Kite!” 1967 Beatles album “Sgt. Pepper’s Lonely Hearts Club Band“. This is another one of my favorite silly songs from Sgt. Pepper both the album and the movie. I saw a documentary one time with Sir George Martin produced many of the Beatles records. He explained the inspiration for this strange song was a poster that John Lennon had found in an antique shop. A reproduction of the poster is shown here and you can get all the details in the Wikipedia article by clicking on the title of the song. I like this live rendition and it had a really cool laser light show with it that gave at the circus feel of the original song. This was the last of the “never before performed live” songs of the evening.

“Something” 1969 Beatles album “Abbey Road“. McCartney walked to the side of the stage and picked up a ukulele. He said that this was a gift from George (George who? snicker) who loved to play ukulele. He said that George was a big fan of British comedian and singer George Formby who was famous for playing ukulele as well. He said one day he and George (Harrison not Formby) were sitting around together on a sofa and started playing one of George’s songs both of them on ukuleles. He then began playing and singing “Something in the way she moves…”. He sang at least an entire verse and a chorus or perhaps more all alone just strumming on that little ukulele. It was mesmerizing sitting there watching him play and thinking about the two of them sitting around strumming of these little instruments in an impromptu jam session. When the song got around to the electric guitar solo, the band joined in and from there out they sing the entire song in a fully produced version reminiscent of the original.

This was the second time in the evening that I broke down and cried. I’ve already mentioned that I had recently watched the documentary about Harrison titled “George Harrison: Living in the Material World“. That documentary was also emotional for me because it taught me all sorts of things about Harrison and I never knew and made me realize how underappreciated he had been by everyone during his lifetime. As the song went on I began thinking that I would never hear George Harrison perform live because he died of cancer in 2001. So I thought to myself this is the closest I’m going to get to hearing him live. To hear one of his closest friends sing his greatest song in tribute to him.

1 thought on “Paul McCartney in Concert: Part V “Songs From Silly to Serious””