You are here: Cyborg5 Home > CY's Eye on Life > Paul McCartney in Concert: Part IV “Memories Both Fond and Sad”

At this point I think my emotions have pretty much settled down and I’m just sitting back and enjoying the show.

Back to the Guitar 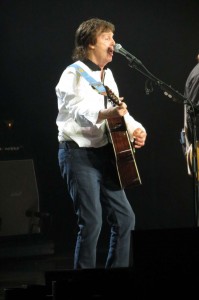 “I Just Seen a Face” 1965 Beatles album “Rubber Soul“. McCartney moved back to guitar after playing several piano songs. This is a fairly obscure old Beatles song. I think I’ve heard it somewhere but it’s not a favorite by any means. My research says in the UK had originally appeared on the “Help!” but it and one other song were excluded from the US version of that album.

“Another Day” 1971 McCartney single. This was his first single released as a solo artist. Sort of like “Maybe I’m Amazed” I think it got overplayed so much that I got tired of it.

My Roots As a Bootlegger

“And I Love Her” 1964 album and movie “A Hard Day’s Night“. Okay it’s time to get emotional again. This is my second or third most favorite Beatles song of all time with “Yesterday” holding the number one spot and this one in a close tie with “You’ve Got to Hide Your Love Away” from the album and movie “Help!“. I was back in the Beatles concert again and although I don’t think I cried during this one it did get me pretty emotional. 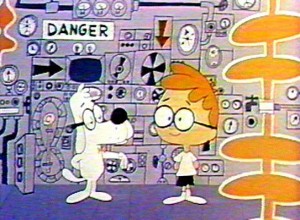 Okay Mr. Peabody set the Way Back Machine for 1964. The location is the Lafayette Road drive-in theater and I’m sitting in the back of our Corvair van in my wheelchair with a tray across my arm rests. Sitting on that tray is a small 3 inch reel-to-reel tape recorder. (Note this was before cassette tapes became widely used.) The microphone is propped up on the window of the van right next to the horribly low quality drive-in movie speaker that is hanging in our window. I’m watching the film “A Hard Days Night” with my mom and dad. Every time one of the songs comes on I quickly hit the record button on the tape recorder. The people who sneak video cameras into theaters these days to bootleg movies thought they were on the cutting edge of bootleg technology. All the way back in the 60s I was bootlegging the soundtracks of this film, “Help!” and “Mary Poppins”

This song was performed in the movie during a sound check for the TV show in which the Beatles were going to appear. It really ticked me off that there is a brief interruption of the song by one of the TV technicians saying something during the sound check. Back then before even seeing the movie I had heard the song and really liked it and was disappointed that it had been ruined in the film and not presented in a pristine version.

The version I heard that night in the concert was absolutely wonderful. I also liked that the video camera got a close-up of one of the band members playing the percussion of clicking wooden sticks together which is one of the signature parts of the original arrangement. The other signature part of that song is a four note guitar rift that is absolutely beautiful. In the 2011 documentary “George Harrison: Living in the Material World” which I had recently seen, Paul McCartney said that even though many of the Beatles songs were listed as written by “Lennon-McCartney” it was George read written that brilliant four note rift that McCartney himself thought made the song special and so do I.

At some point during the concert and I really can’t remember when, he announced that he was going to play songs that had never been heard live in Indiana. He said in some cases the songs were being played on tour for the first time this tour. Judy and I both figured it was some newly recorded song but in each case it was an old Beatles song. I don’t recall if this was one of those that he said it never been performed on tour or not. However according to Wikipedia it says that this song was only performed live twice by the Beatles. That means it was probably was one that he first said had never been done “in Indiana”. You can click on the song title in this section and read the details. I do recall a couple of other ones that he categorized this way and I will mention them later. 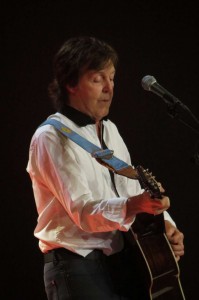 “Blackbird” 1968 Beatles album “The Beatles (White Album)“. I hadn’t noticed but most of the band except for the percussion had left the stage during the previous song and for this song, McCartney walked downstage to a smaller stage in front of the regular stage. This beautiful little acoustic guitar ballad is a big favorite Beatles fans and probably top 10 on my list. Anne told me afterwards that the guy who was sitting next to her had gotten pretty choked up during the song. A friend of Judy’s had told her that at one point during the concert the last time they saw him he had played a segment of the concert on his own with no other accompaniment so we were certainly expecting this and pleasantly surprised he was doing it again. As he sang that front section of the stage started to rise up about 15 or 20 feet in the air. I sort of felt sorry for the people in the front row who probably couldn’t see him for the first time the concert. I’ve always enjoyed acoustic solos in big loud concerts. There’s just something piercing about the sound of an acoustic guitar in a huge arena or outdoor amphitheater like Deer Creek. I mentioned I’m a fan of the group Yes and they always do one or two acoustic songs this way. 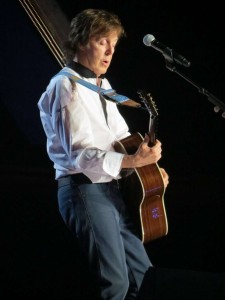 “Here Today” 1982 McCartney album “Tug of War“. This very touching song was dedicated to “my friend John” who is no longer with us. It was written after his death and was in the form of a conversation they never had. As he introduced the song I wondered if there were young people in the audience saying to themselves “John? John who? I wonder who he is talking about.” I guess I was just feeling old. My guess is 99.99999% of the people there that night knew who “John” was. I had heard him perform the song before I don’t recall when on TV. Judy and Anne had never heard the song before. When I saw it before and that night in concert it was obvious that he chokes up a little bit trying to sing it.

It was a little bit emotional for me not that I felt the loss of John Lennon all that much. I love his music but personally I didn’t really care for him. I like that he was all for peace and love and all of that but I always thought that this signature piece “Imagine” was a little too atheistic for my taste and can even be construed as communist. I don’t mean communist as in Soviet or Chinese dictator style communism. But at more pure type of communism in which people share everything equally. I think John Lennon was so introverted and withdrawn that at times he came off as aloof and inaccessible. Paul and Ringo have such big personalities that you can’t help but like them. George also seems quite withdrawn and inaccessible but not in an arrogant kind of way. So to the extent that you can have a least favorite Beatle out of session unbelievably talented group of people, John was always my least favorite.

I did get emotional however because it told me that there were things left unsaid between Paul and John and I felt sad for him because of that. I had experience that at a young age when many of my friends in high school succumbed to their disabilities at an early age. I learned the lesson the hard way not to leave things unresolved with someone when you never know if you’re going to see them again. This is especially true for apologies. 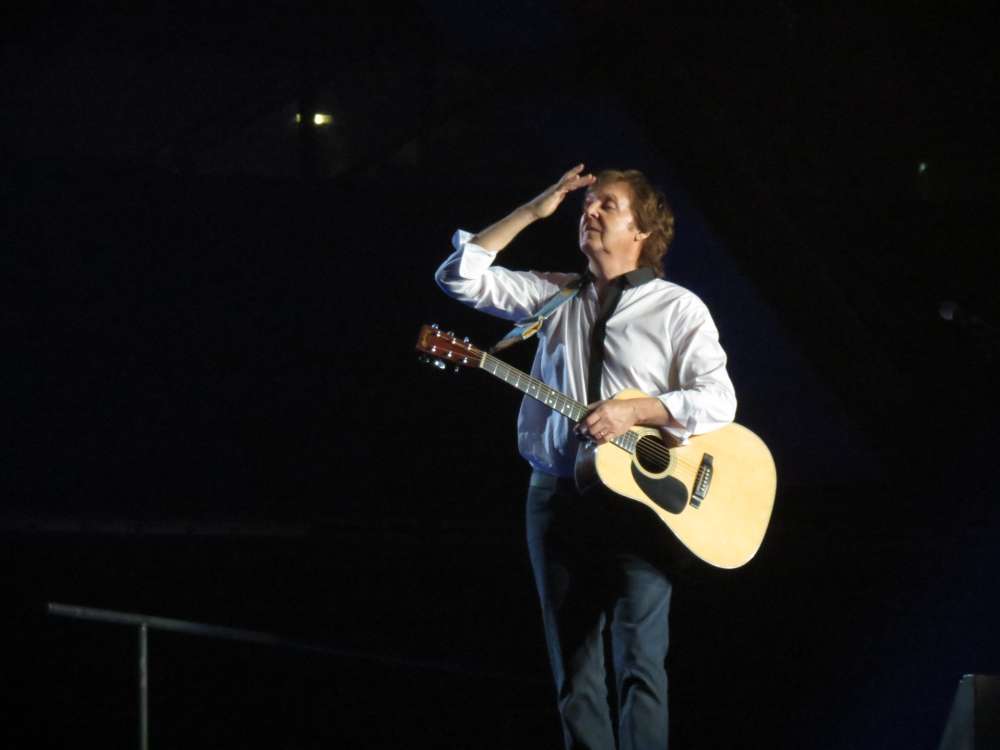