In my previous post I chronicled the events leading up to my attendance at the Paul McCartney concert at Bankers Life Fieldhouse on July 14. When we last left our intrepid concertgoers, the lights had dimmed, images begin being projected on video screens. I declared “The concert had begun!”

The images that went scrolling by on the screens started out with images from what appeared to be McCartney’s childhood. The music included McCartney and/or The Beatles and/or other people singing Beatles songs throughout history. You could see it progressing from the past up to the present. However at the rate it was going it soon became obvious this was going to be an extremely long introduction. Each song seem to play out in its entirety where it would’ve been better just to have a few 30 second clips from each song and fewer images. It showed The Beatles back in Liverpool. It showed them coming to America. It showed their hairstyles changing throughout the years. It finally got into the post-Beatles era and included more songs from Wings and other solo songs. Some of them the original songs and some were cover songs by other artists which were pretty interesting. But this overture dragged on and on. Judy looks at her watch a couple of times but I don’t think she looked right as it finally completed. My guess is it was about 25 minutes long which was way way too long. The crowd was pretty polite through most of it but they did start clapping and chanting when it finally became apparent it was almost over. It concluded with the Wings song “Silly Love Songs”. Judy kept saying “that would be a good time for him to come out and start singing that song.”

The images finally shifted to an image of a starry sky. The stars rearranged into the image of McCartney’s famous violin shaped left-handed bass guitar. The lights finally dimmed completely and he and the band came on stage to thunderous screams and applause.

He was dressed in a long black coat over a white shirt and tie and had on black pants. (Actually it just looked like a narrow 60s style necktie. As the photo shows it was just a black stripe on his shirt.) He was carrying the famous bass guitar that I just described. The band consisted of two other guitar players, a keyboard player and a drummer. 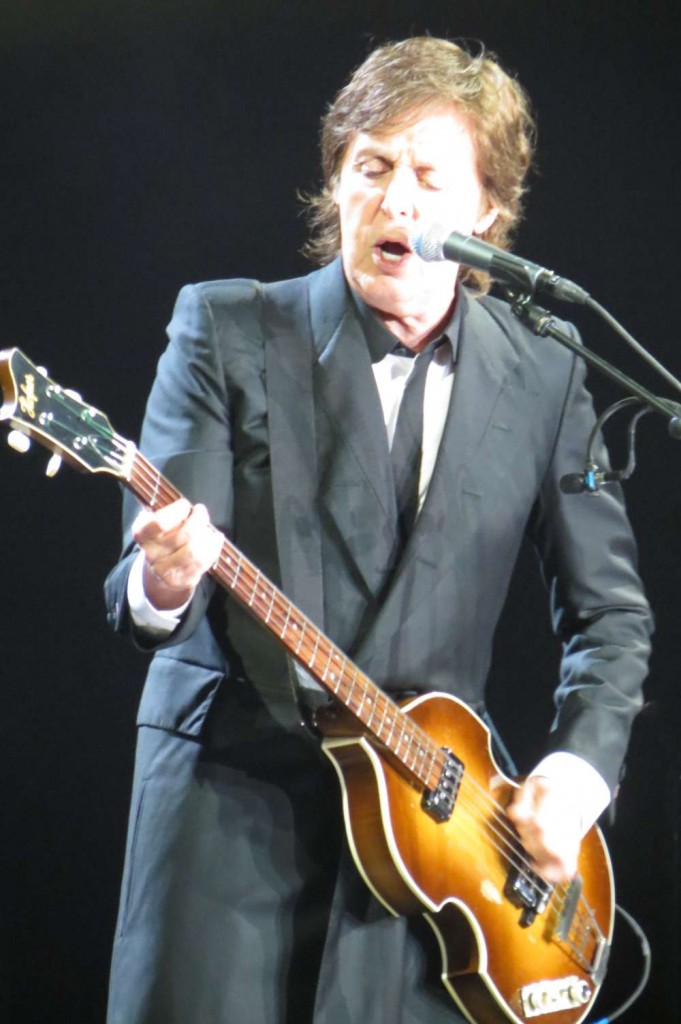 You can click on all of the concert photos that Anne took to see larger versions.

What follows below is my impression of each song that he sung, the effect that the song had on me and a little bit of my own history regarding that song. Fortunately I was able to find a set list online the following day which helps refresh my memory of what was played and tells me a little bit about the songs that I didn’t know. The links on each song title and album title take you to Wikipedia articles.

“8 Days a Week” 1964 album “Beatles for Sale” This seemed a strange choice for an opening song. I like the fact that it was an early Beatles song and I always thought the title and concept was kind of good for a love song. The idea that seven days a week wasn’t enough to show how much you cared for someone. The backbeat of the song seems to be a little bit country and western in its flavor. I’ve noted that it’s a favorite of country singers on American Idol when it comes to Beatles Week. I guess since I’m not a country music fan it’s not been one of my favorites. But I really didn’t have much time to think about the song itself because it was just so bizarre to think I was really had a concert with Paul McCartney. I sort of flashback to hearing comedian Dana Carvey talk about the first time he met Paul McCartney. His speech turned into something like a little kid and he reached out and touched him and said “You’re a Beatle. I touched a Beatle”. That is exactly how I felt just being there.

Here is a YouTube excerpt from Dana Carvey’s HBO special that shows the routine that I’m referring to. If an illegal copy so this link might end up being broken in the future.

“Junior’s Farm” 1974 Wings song. What was this? Another country song? If I wasn’t pretty sure that they were playing almost the same set list throughout the tour I might’ve thought they were stereotyping Indiana as a bunch of hillbilly farmers and trying to win us over with some country songs. This one was recorded in Nashville while the band Wings was staying on someone’s farm. I think I had perhaps heard it one other time but it was hardly among their greatest hits. I was just settling back and enjoying the show, still a little bit awestruck about where I was.

Tell Me Why You Cried 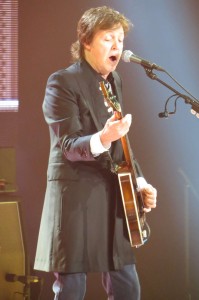 “All My Loving” 1963 Beatles album “With the Beatles” Holy Shit! I completely lost control of myself in tears just begin pouring down my cheeks. The song has no introduction. It just starts out with Paul’s local “Close my eyes and I’ll kiss you. Tomorrow I’ll miss you.” It was like someone had thrown me into a TARDIS time machine and transported me out of the arena. It was no longer July 14, 2013. I was no longer at a Paul McCartney concert. It was 1964 and I was at a fucking Beatles concert! It wasn’t that screaming 12-year-old girl in the front row of a Beatles concert kind of crying. I was still 58 years old and it had finally hit me that I was at a concert with the greatest song writer of my lifetime. He was singing a 50-year-old song that was just as meaningful today as it was the day he wrote it. Somehow it wrapped up in the little package all of the wonderful feelings I had ever felt about any Beatles song ever written and all the emotional things that had ever gone on in my life that were somehow connected with Beatles music.

I was surprised by how emotional I had gotten over the song. I had prepared myself for a Paul McCartney concert. I prepared myself the to be moved and to enjoy “Let It Be”. I figured I would cry on “Yesterday” for reasons I will explain later. What I had not prepared myself was for the emotion of being at what felt like an actual Beatles concert. It didn’t matter that there was only one Beatle on stage. I was at a concert that I never thought I would have the opportunity to attend. It really freaked me out.

People tend to throw around the phrase “The Soundtrack of My Life” much too easily these days. I’ve been a fan of Elton John ever since I first heard “Your Song” and it was great to see him in concert two years ago. I love Billy Joel. I saw him in concert back in my college days and still love his music. The 70s rock group “Yes” is among my favorites of all time. I’ve seen them in concert several times as recently as two years ago. My love of keyboard music stems from my love of Keith Emerson of the group Emerson, Lake, and Palmer who were my favorite band in the 70s. The greatest concert I had ever seen was their “Works” tour which came to Market Square Arena and featured accompaniment by a full symphonic orchestra. I’ve seen Sting (with and without The Police) in concert several times and I own all of his albums and love his music. I’ve seen productions of Andrew Lloyd Webber‘s “Phantom of the Opera” and “Jesus Christ Superstar” (the latter of which I could sing by heart at the drop of a hat.) I’ve been to see stage productions of “Les Miserables” three times and saw the recent movie of the musical. Despite my love for all of this music, none of it deserves the title of “The Soundtrack of My Life”. That title is reserved for the music written by the man who stood on the stage across from me and sang a 50-year-old rock ‘n roll love song.

The old violin shaped bass guitar and the long black coat that looked like The Beatles and the fact that even though his face is much wrinkled it is still that same smiling baby face we all saw on the Ed Sullivan show 50 years ago… It all merged together to transport me into a different time and place and filled me with emotions I’m only marginally able to describe here.

When the song was over Judy turned to look at me and I said to her “Is this for real? Are we really, really here? I’m crying my eyes out.” She started laughing a nervous laugh and said that she had been crying as well. She said she couldn’t stand up and cheer or do anything during the song. She just had to lean back and cry. She had said repeatedly before and after the show “I’ve been waiting 50 years for this.” And it meant a lot to both of us that we both had broken down in the same way on the same song at the same time. We both understood what it meant to each other and it meant more to both of us because we were there was someone who understood.

If I had gone with my sister Carol or my sister Karen or just with Anne alone or anyone else I would’ve enjoyed the concert just as much. But I would not have had that moment where Judy and I looked at each other with tears in our eyes and we understood that we had each shared something special. 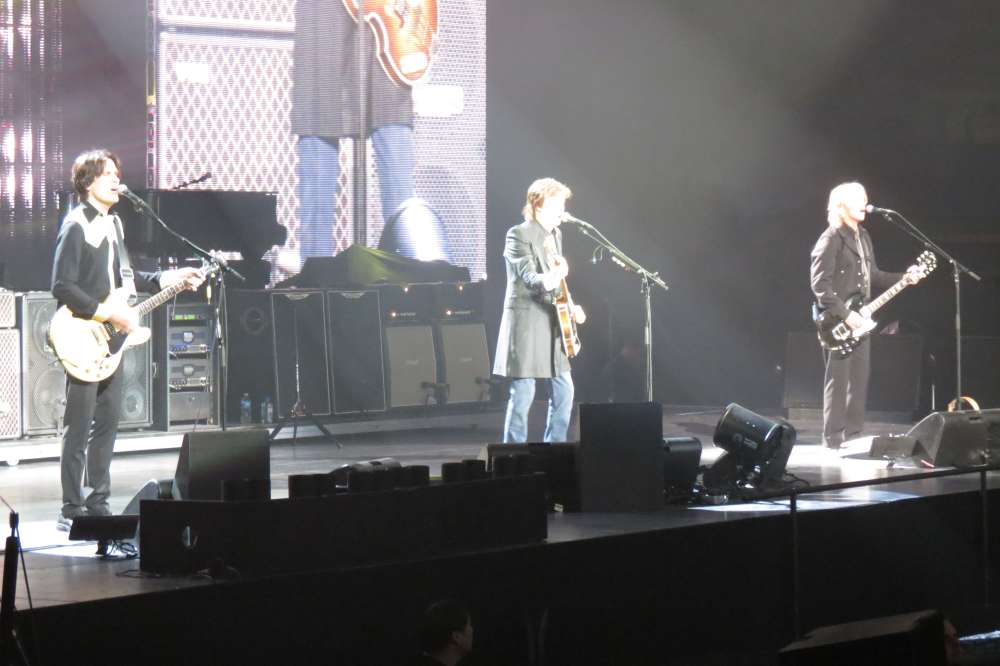