This is the 16th and last in a series of articles about my recent quest to replace a broken VCR in this era of DVDs, DVRs, and other newfangled gadgets. Click here for the beginning of the series.

During the course of writing this series of articles about TVs, VCRs etc. my Dad stumbled across some photographs he took in 1984 of our living room and my bedroom. He kept the photos in a box in the garage for insurance purposes to document our consumer electronics in case they were damaged or stolen. The images of my old kit built computer and of me sitting at my old Radio Shack Model I computer in an earlier installment or from some of those photos. Here are a collection of some other photos with close-ups. You can click on most of the images for larger versions.

The first image shows our old 25 inch color Zenith cable ready TV in our living room. Note that NASCAR is on the screen. On the lower right is a cabinet that contained all of our videotapes. None of them were prerecorded tapes. Most of it was movies and specials we taped off of HBO and other cable channels. 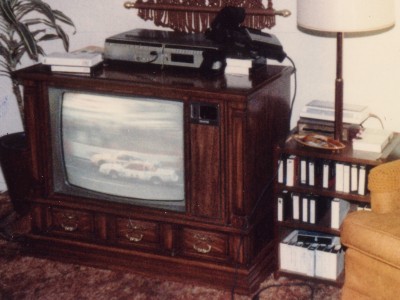 This next image shows the old RCA VFP-170 SelectaVision convertible VCR that is described in an earlier post along with my old video camera. The images I used in a previous post in this blog were all taken from advertisements on eBay or other images I found on the internet. This is the only image I could find of our actual unit.

The image below is a close-up of some boxes sitting on top of the end table cabinet next to the TV. The white box on top that is barely visible is one of those slider style cable boxes I talked about in an earlier installment. It was used for the VCR which was not cable ready. Note that the TV was cable ready and did not require a converter. The brown box below that is an RF distribution box that allowed us to view cable or VCR in the living room, and two bedrooms. I still have a similar box in the living room today that connects the living room devices to my office and my parents’ bedroom.

The next image is a view of my bed with the TV on the wall above it. Note the MC Escher print and the space shuttle poster hanging above the bed. They were there for many years. On the right is my Hoyer that I use to get in and out of bed. Behind that is an old color TV and on top of it is a remote-controlled cable box that I used because the TV wasn’t cable ready. 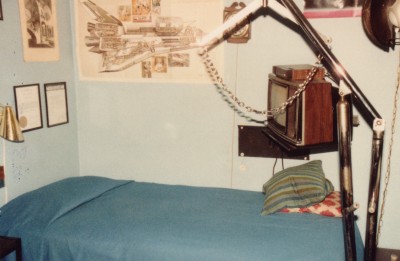 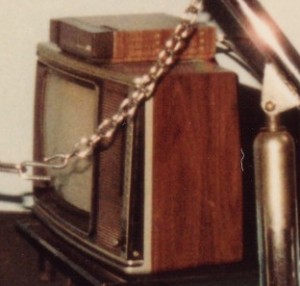 Finally here is a close-up of the TV with cable box on top of it.

Well that wraps it up for my nostalgic look back at old TVs, VCRs, and cable boxes.

I’m not really sure what my next blog series will be but the next entry in my blog will be my preview of the new fall TV series.